And once more with feeling: the bubble is real 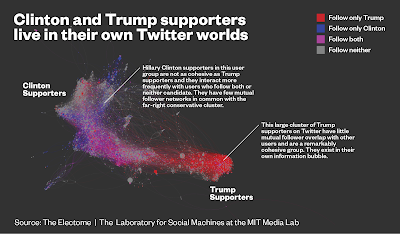 I've barely followed Vice, since I found my few experiences to be somewhat on the sensationalistic side. However, the infographic from this story and the story itself may be at least somewhat useful. In particular note how little overlap there is between Clinton and Trump supporters. Trump supporters especially appear to live in their own reality. Some of the other infographics are telling as well. We used to call this the echo chamber about a decade or two ago. Bubbles or echo chambers are not especially healthy for a democracy. It is useful to know where we are currently. That will help us sort out the extent to which we can improve our own media consumption and public discourse.

Posted by James Benjamin at 8:30 PM