Today We March For Science

Once I learned that there would be a March for Science event, I knew I'd have to be involved somehow. My initial modest hope was that there would at least be a satellite event in our state's capital, Little Rock. To my pleasant surprise, Fort Smith ended up holding one of the satellite events. Our event would likely be dwarfed by the larger events worldwide, but that Fort Smith is now a viable host for events like this is itself a sign of the times we live in. I know many of the organizers, as they are primarily on faculty with me. There was a good deal of support thanks to our local Indivisible chapter and Western Arkansas TOGETHER WE WILL. Many of us at today's event were scientists and science educators. Many more were fellow travelers. We share a common concern: the state of support for our sciences in the US.

It seems obscene that now that we're well into the 21st century that we would need to hold rallies in order to remind the public that we exist and that we matter. And yet here we are. The level of hostility toward the sciences in the US seems to be at an all time high. Nor has there been more than lip service paid to science education, it would seem. As the Dean from our university's STEM College acknowledged, the proportion of students majoring in a science discipline is woefully small compared to other developed nations as well as those that are developing (China, Singapore, etc.). As I recall E. O. Wilson writing in Letters to a Young Scientist, there is good reason to be optimistic about the continued development of the sciences globally. Regrettably, the US appears to be in the process of abdicating its leadership role in the sciences. That will not bode well for us in the long run. We march in part to remind our fellow Americans of that reality. We march to remind our fellow human beings of how integral the sciences are to our civilization.

Scientists are often hesitant to get involved in public life and would prefer to let the data speak for themselves. The reality is that our data do not speak for themselves. They need advocates. How we go about our work needs to be better communicated to the public. We test hypotheses based on theoretical models. We search for converging evidence over time. In many cases, such as with climate change or many media violence cues, there is considerable converging evidence supporting that those phenomena are real and that they should concern us. The qualifications for working in the sciences needs to be better communicated. There are plenty of misconceptions about the level of IQ (only one small facet of intelligence) needed to become a scientist. Wilson himself once noted that he was not the smartest man in the room - and yet he went on to win a Nobel Prize for his work. He worked hard, persisted, and learned how to network with those who had expertise where he did not. That is what the vast majority of us do. Even better, we don't need to be math geniuses to succeed in most sciences (there are exceptions). The level of mathematics competency in my discipline is relatively doable for practically any college or university student - unless one wants to be a quantitative psychologist, in which case plan on a heavy mathematics course load in order to truly understand the intricacies of theoretical statistics. But generally, to repeat, one need develop a minimal level of fluency in mathematics and conduct research that will contribute to humanity.

I'd love to say that we could be nonpartisan. The facts on the ground in the US suggest something different. Those of us who work in the sciences are well aware of politicians who are hostile to us and well aware of which party has shown considerable hostility to our work. We are well aware of who has tried to cut funding for fundamental work in the sciences, and we are well aware of who has written off our work as trivial, or who has accused some of our work as being little more than a hoax. We know who might want to scrub the archives of "inconvenient" scientific truths. As a researcher, I am comfortable working with colleagues from all walks of life. There is a red line though that may never be crossed: we seek and report the truth regardless of how it affects a party's polling numbers or corporate quarterly reports.

It is a shame that we need to have science marches, but if we must, I am thankful to know that I am in good company. I hope we can continue to work together to advocate for our work. If we don't, no one else will. 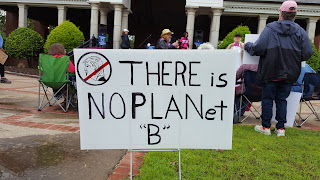 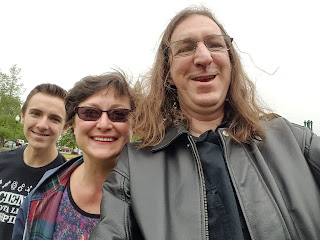 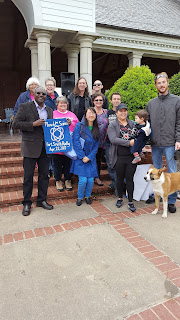 Posted by James Benjamin at 7:35 PM