The US Republican Party in no Longer Conservative: It is Authoritarian

The data tell the tale. The mass media and still too many of the US intelligentsia refer to the Republican Party (GOP) as conservative, and its politicians and followers as conservatives. I would argue that the party leadership, its politicians, and its activist base abandoned conservatism a long time ago, and took a much more authoritarian turn. And before anyone tries to get too far into the weeds here, I published some research roughly six years ago (and I am far from alone I suspect) distinguishing at least some very substantial facets of conservatism from authoritarianism. That there are actual conservatives in the US who want nothing to do with the GOP in its current form should speak volumes. That I, not only as a professional but as a citizen, also find common cause with the same former GOP conservative dissidents should speak volumes as well. Then again, my personal and publicly political views tend to be at least somewhat heterodox, so there may be a few who frequent this blog who are not entirely surprised by my last statement. But enough of that. What are the data showing? 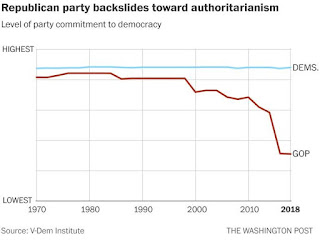 In terms of commitment to democracy, the Democratic Party's policies and behaviors have been stable over several decades. That jibes with my own experiences as a citizen and voter. The GOP is different story. There seems to be some initial lean away from democracy toward the end of the Reagan era, then another noticeable lean away from democracy during the early GW Bush era. Toward the end of GW Bush's term, there is a bit of a move away from democracy. That turn against democracy seems a bit more pronounced around the time that Obama gets the nomination and the Presidency. There is another turn away from democracy once the Tea Party movement within the GOP consolidates its power about a decade ago. And then around the time that Trump rears his head, there is practically a wholesale abandonment of democracy as a set of policies and norms or as an ideal. I suspect that the numbers look worse in 2020, and probably will get worse for a while to come. 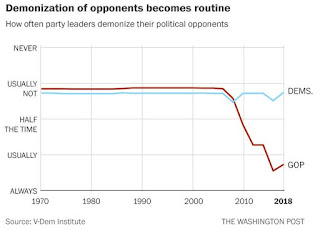 In terms of demonization of political opponents, again the Democratic Party shows minimal change. There is some fluctuation starting in 2008, which I suspect is related to John McCain's choice of running mate (he really should have stuck to his guns and chosen Joe Lieberman instead), and Trump's initial run. But notice that the Democratic Party, so far, seems to go back to baseline. Let's hope it continues. The GOP's devolution is striking. Starting with the 2008 electoral season and continuing to the present day, an argument can be made that the GOP leadership, from a policy and practices standpoint has decided that making their political opponents existential threats is an acceptable practice. Once opponents become existential threats, the next graphic is inevitable. 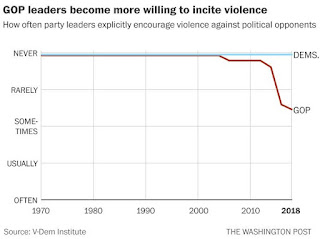 Inciting violence is something I would have never expected of either of our two major parties. And yet, here we are. Once again, the Democratic Party leaders refuse to go there. The GOP leaders on the other hand? Study Trump's speeches, rallies, his inner circle's pronouncements, and so on, and the devolution that takes place during the latter half of the 2010s seems obvious. We've experienced advocacy among Trump's inner circle for martial law if electoral votes did not go a certain way, efforts to commit violence against peaceful BLM protests (note that I am careful to state peaceful - acts of violence are crimes and will get treated as such), and of course the January 6th insurrection, which should be called for what it was: an attempted coup and an act of terrorism.

The V-Dem data are stark. A major party within the US has gone down the same road as Fidesz in Hungary, a nation that is considered a failed democracy. You read that right. Hungary, a nation I visited seven years ago when there was still some faint hope, is now the EU's only dictatorship. If I were a professional advising the EU, I'd advise their leadership to cut bait. For whatever reason, the ruling party, apparently for at least a few generations, is bound and determined to go back to its alliance with Russia, much as it did when the USSR was running the show in eastern Europe. My impression is that much of eastern Europe is embracing democracy, and has found a place within the EU and NATO. That is a beacon of hope in a very turbulent time.

How does this data tie in more psychologically? It's not entirely clear. There seems to be a substantial cohort of authoritarians who believe the Big Lie that Trump is the rightful President and that his election was stolen from him. From what we know about authoritarianism as a theory, we know that those who are strongly authoritarian will take orders from those whom they consider legitimate leaders. We should not be surprised when one of the defense refrains from the 500 plus (and counting) defendants from the January 6, 2021 insurrection state that they really believed that they were ordered to be there by Trump. From what we know about authoritarians, authoritarian aggression is instigated by those who are identified as legitimate authoritarian leaders. Trump and his inner circle certainly can make that claim, especially to the extent that they contended prior to the 2020 election that the results were not legitimate, advocated violence (including a military coup), etc. About a quarter of the US adult population, and a much larger portion of the GOP base agree with those actions, and some certainly have participated.

At this point, the bulk of the authoritarians in the US make up the GOP's rank and file. It's no surprise that the party policies have continued to become less and less democratic, and increasingly illiberal. Unlike conservatives (who really are distinct from authoritarians, as even some of my data suggest), authoritarians really do see those who are not with them as a threat, and will follow those whom they see as their legitimate leaders. We've seen that with the events of January 6th. We've seen it again in the way those representing the more authoritarian faction of the party have embraced conspiracy theories surround the last Presidential election, dismissed a very serious public health crisis, and even spread conspiracy theories about the very vaccines that would - if taken by enough of the population - lead us to a post-pandemic era, and engage in moral panics about phenomena that are truly much ado about nothing (your typical college class at a regional university or community college is not going to even mention critical race theory, for example). As long as a certain former President has an iron grip on the GOP, such trends will continue. The implications for GOP policy are clear. We'll see many of its elected officials try to legislate against threats that don't exist (voter fraud is very difficult to pull off with the safeguards in place as of the 2020 elections, CRT is not taught outside of a very few elective courses in largely elite universities), parrot the rhetoric of the former President in order to curry favor with the authoritarian portion of the base (who tend to be most active in primaries) in order to retain elected positions or to gain a chance at winning an election, and making appearances with white nationalist and other fringe militia group figureheads who would, in an earlier era, been avoided and remained marginalized. The GOP's elected officials are in the position taking increasingly antidemocratic actions at least in part because it appears to be the way to win at least primary elections, and if enough opposition votes can be suppressed, maintain a grip on power disproportionate to its overall popularity. There is at least a predictive relationship between the psychological makeup of the GOP base and its rapid movement away from the generally democratic policy positions it once embraced. I don't see that dynamic changing anytime too soon.

Posted by James Benjamin at 2:08 AM