Here's another relevant oldie but goodie by Zhang's lab: 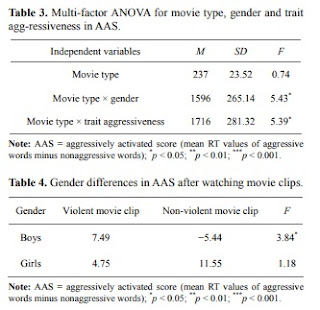 What is odd about this one - aside from Table 3, which is just a mess - is that there is no way that the simple effects F for Boys would be statistically significant given the degrees of freedom. Recall that there are 74 participants in the experiment. That chews up one df. Now let's look at the df for each comparison that would have to be computed, regardless of whether or not it was reported. There are three main effects and a DV which we'll simply note is the difference in reaction time between aggressive and non-aggressive words in a Stroop task. Main effect for movie type costs 1 df, main effect for gender costs another df, and main effect for trait aggressiveness as defined in the article costs 2 df. There are the interactions of movie type x gender (1 df), movie type x trait aggressiveness (2 df) and gender x trait aggressiveness (2 df). The three-way interaction will take another 2 df. That leaves us with 62 df. A significant F-test for simple main effects would need to be practically 4.00. The obtained F in Table 4 for Boys is well below that threshold. And yet the authors claim statistical significance for that particular subsample. The authors want to claim a significant movie type x gender interaction, but have no significant simple main effects. That does not compute, folks.

This, by the way, is one of the better articles from this lab in terms of - at least on the surface - data reporting.

One more thing to note: the authors improperly use terminology commonly used by aggression researchers incorrectly. They are not measuring aggressive attitude levels. They are measuring accessibility of aggressive cognition (or thoughts, in lay terms). I see that mistake enough times to acknowledge that it is hardly unique to Zhang's lab. It is just an annoyance, I suppose.

The article can be read here.

File under articles that probably should not be cited without adequate clarification from the authors.