A little over a year ago, I blogged about some of the missed opportunities from the Benjamin et al. (2018) meta-analysis. One of those missed opportunities was to examine something known as an investigator allegiance effect (Luborsky et al., 2006). As I noted at the time, I gave credit where credit was due (Sanjay Srivastava, personal communication) for the idea. I simply found a pattern as I was going back over the old database and Dr. Srivastava quite aptly told me what I was probably seeing. It wasn't too difficult to run some basic meta-analytic results through CMA software and tentatively demonstrate that there appears to be something of an allegiance effect.

So, just to break it all down, let's recall when the weapons effect appears to occur. Based on the old Berkowitz and LePage (1967) experiment, the weapons effect appears to occur when individuals are exposed to a weapon and are highly provoked. Under those circumstances, the short-term exposure to weapons instigates an increase in aggressive behavior. Note that this is presumably what Carlson et al. (1990) found in their early meta-analysis. So far, so good. Now, let's see where things get interesting.

I have been occasionally updating the database. Recently have added some behavioral research, although it is focused on low provocation conditions. I am aware of some work recently conducted under conditions of high provocation, but have yet to procure those analyses. That said, I have been going over the computations, double and triple checking them once more, cross-validating them and so on. Not glamorous work, but necessary. I can provide basic analyses along with funnel plots. If there is what Luborsky et al. (2006) define as an allegiance effect, the overall mean effect size for work conducted by researchers associated with Berkowitz should be considerably different than work conducted by non-affiliated researchers. The fairest test I could think of was to concentrate on studies in which there was a specific measure of provocation, a specific behavioral measure of aggression, and - more to the point - to concentrate on high provocation subsamples, based on the rationale provided by Berkowitz and LePage (1967) and Carlson et al. (1990). I coded these studies based on whether the authors were in some way affiliated with Berkowitz (e.g., former grad students, post-docs, or coauthors) or were independent. That was fairly easy to do. Just took a minimal amount of detective work. I then ran the analyses.

Here is the mixed-effects analysis: 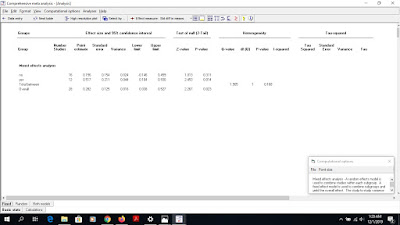 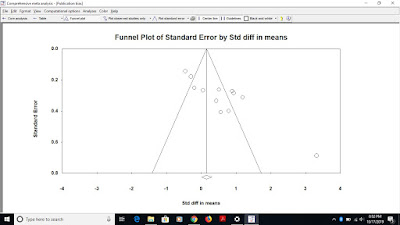 Above is the funnel plot for studies from the allegiance group. 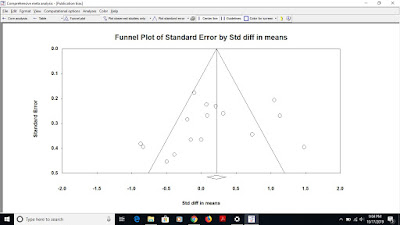 Above is the funnel plot for studies from the non-allegiance group.

I can slice these analyses any of a number of ways. For example, I could simply examine subsamples that are intended to be direct replications of the Berkowitz and LePage (1967) paper. I can simply collapse across all subsamples, which is what I did here. Either way, the mean effect size will trend higher when the authors are interconnected. I can also document that publication bias is a serious concern when examining funnel plots of the papers in which the authors have some allegiance to Berkowitz than when not. That should be concerning.

I want to play with these data further as time permits. I am hoping to incite a peer to share some unpublished data with me so that I can update the database. My guess is that the findings will be even more damning. I say so relying only on the basic analyses that CMA provides along with the funnel plots.

For better or for worse I am arguably one of the primary weapons effect experts - to the extent that we define the weapons effect as the influence of short-term exposure of weapons on aggressive behavioral outcomes as measured in lab or field experiments. That expertise is documented in some published empirical work - notably Anderson et al. (1998) in which I was responsible for Experiment 2, and Bartholow et al. (2005) in which I was also primarily responsible for Experiment 2, as well as the meta-analysis on which I was the primary author (Benjamin et al., 2018). I do know this area of research very well, am quite capable of looking at the data available, and changing my mind if the analyses dictate - in other words, I am as close to objective as one can get when examining this particular topic. I am also a reluctant expert given that the data dictate the necessity of adopting a considerably more skeptical stance after years of believing the phenomenon to be unquestionably real. I do have an obligation to report the truth as it appears in the literature.

As it stands, not only should we be concerned that the aggressive behavioral outcomes reported in Berkowitz and LePage (1967) represent something of an urban myth, but that in general the mythology appears to be largely due to mostly published reports by a particular group of highly affiliated authors. There appears to be an allegiance effect in this literature. Whether a similar effect exists in the broader body of media violence studies remains to be seen, but I would not be surprised if such an allegiance effect existed.
Posted by James Benjamin at 11:45 PM